“Take that for data.”

On April 17, 2017, the San Antonio Spurs defeated the Memphis Grizzlies, 96-82, in Game 2 of their first-round playoff series. After the game, something just didn’t add up for Memphis Grizzlies coach David Fizdale. Numbers swirled in his mind, but they didn’t make any sense. The preferential imbalance from the referees finally broke the coach’s scale.

Rocked by the injustice, Fizdale summoned Rodney Dangerfield and gifted us a delightful new, meme worthy phrase: “Take that for data!” Immediately, the David Fizdale rant went viral. We were even granted an amazing accent quote: “they not gonna rook us!” But what exactly made Fizdale so mad? And what other delicious content escaped his mouth?

What Did Fizdale Say?

The Grizzlies cut their halftime deficit short in the 3rd quarter, and when asked if he would use that same lineup more in game 3, Fizdale replied “Maybe. Yeah… I’m going to evaluate that stuff when I cool off… and, uh… have a glass of wine on the plane and, uh… look at the film.”

Much respect for the wine slurping game review. I imagine he also strokes a Persian cat while scanning through game film. At this point, the rant is ramping up. Steam can be seen rising from his shoulders. Get this man some Merlot.

Fizdale continued: “You know, it’s unfortunate that I got a guy like Mike Conley who in his career has got zero technical fouls, and just cannot seem to get he proper respect from officials. It was a very poorly officiated basketball game. Zach Randolph, the most rugged guy on the game had zero free throws, but somehow Kawhi Leonard has 19 free throws.”

Well that sounds terrible, like Kawhi was coming around for free throws like they were Costco food samples. At this point, the fine-o-meter cha-chinged like a hot slot machine. He drew a flagrant-2 with that line. Who cares now if he tosses some chairs on the way back to the lockerrom. Even though he has a point, the bubbling Memphis Grizzlies coach began to boil.

“Overall, 35 times we shot the ball in the paint, we had 15 free throws FOR THE GAME. They shot 18 times in the paint and had 32 free throws. Kawhi shot more free throws than our whole team. Explain it to me.”

“But I’m not going to let them treat us thay way. You know, I know Pop’s (Gregg Popovich) got pedigree, and I’m just a young rookie, but they not gonna rook us. That’s unacceptable. That was unprofessional. My guys dug in that game and earned the right to be in that game and they did not even give us a chance.”

He could have ended the presser right there. “They not gonna rook us” would have been a solid exit line. But he reached down deep for the finale. Fizdale paused. Reflected. Breathed heavy. He slammed his pen and exploded with the undisputed quote of the year: “Take that for data!”

Take That for What?

Other than the former Memphis Grizzlies coach, the only people who should be able to say “take that for data” are middle school students who smash all of the other displays at the science fair after losing to the kid whose dad works at NASA. But like anything that ever goes viral, Twitter will have it’s say. Jamie Bragg Jr. (@jamiebraggjr) said “That’s how I’m going to leave meetings from now on, ‘take that for data!’ and then storm out of the room”. Julia Maldonado (@jamaldon90) said “Keep calm and take that for data.”

There are also plenty of ‘Take That for Data’ shirts and mugs available online with both Fizdale’s phrases, designs accented with his trademark beard and glasses. Since David Fizdale’s rant, many people use the “data” phrase, not just in reference to the coach, but as punctuation for a rebuttal involving data. It’s the best you can hope for in a really really specific moment.

As we all expected, he was hit with a $30,000 fine. The Spurs took down the Grizzlies in 6 games. The Warriors won the title. Same old same old. Fizdale was fired after 19 games into the 2017-2018 season. His fiery passion carried him all the way to New York, where plenty of bizarre quotes will no doubt begin. 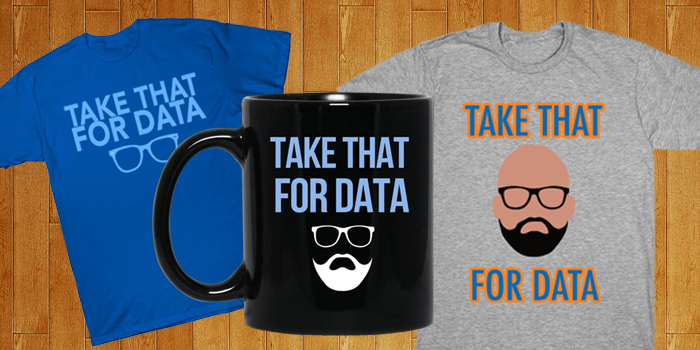